Art's Ironworker - A Memorial to Our Founder

In the lobby of our Philip, SD, manufacturing plant, there is a Scotchman model 5014 CM covered in black sharpie. Hundreds of signatures decorate the never-before-used ironworker, each one a cherished name adding to the tribute to our company founder, Art Kroetch.

A Giant in the Metal Fabrication Industry 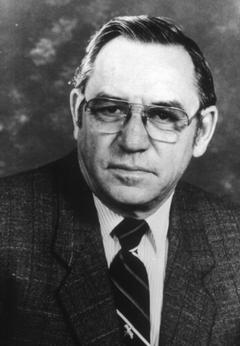 In the beginning, Art's company looked a bit more like a scrap yard than a manufacturing plant. Art built farm products, such as stock racks for pickup trucks, corral panels, gates, and chutes.

But when Art purchased the first hydraulic ironworker patent for Scotchman Industries, the company launched to prominence in the metal fabrication industry. Today Scotchman is the oldest and largest hydraulic manufacturer in the USA. Just as the highly efficient hydraulic pressure of his machines could tailor metal to customer needs, Scotchman helped mold Philip into a home for many hard-working American families.

Art passed away after 50 years of Scotchman leadership. On that July day, in an extraordinary act of their love for the man who had built their company, the employees of Scotchman banded together to purchase that Ironworker in tribute to him.

To pay for the machine, the employees donated vacation time to give the Kroetch's this piece of company history to remember him.

"It just happened to be the last machine built at the end of the day on the day he passed away," said Jerry Kroetch, Art's son and the President of Scotchman Industries. He said the powerful gesture was incredibly special to all of Art's family.

Jerry said that their act of love was reflective of Art's own generous nature and kind spirit.

"His family and employees came first," Jerry said. "He treated all of his employees with the same respect that he wanted in return."

Both the ironworker (from the day Art died) and the last 35 ton machine (the model Art started manufacturing in 1967) Scotchman built were taken to Art's visitation in Philip, his beloved hometown.

In addition to the guest book, the family asked visitors to sign the metal fabrication machines that had helped create Art's legacy.

"Anyone and everyone who came signed their name on that ironworker," Jerry said.

Now, the 5014CM proudly stands in the Philip lobby, as a reminder of the man who paved the way for Scotchman.

As he was with his employees, Art was always generous with customers. He believed in a personal approach. He offered each potential customer an in-house visit from employees who demonstrated Scotchman products at the customer's convenience.

In Art's memory, and as a cornerstone of our values, Scotchman still offers that personal service, to attract new customers while maintaining the ones we already value or appreciate.

Want to set up a free in-house demonstration? Click below.