Jeanie Waara started her Scotchman career on November 6, 1995.  She was hired to fulfill Scotchman’s printing needs. At that time, we printed everything in-house except our product catalogs. Jeanie was in charge of printing (and assembling) every operator manual, price list, warranty card, safety data sheet, plus numerous other documents. She was printing between 1.5 to 2 million sheets of paper annually, with some years being well over two million pieces!  It was definitely a full-time job and one she did very well for 23 years.

Hot Off The Press

When Jeanie took up the reins in Scotchman's Print Department her printer was a monster behemoth that was a little bigger than Dane Hellekson, but not as tall. (Dane works out in our shop... if you know him, you understand this size reference.😀)

In those days, that big ole printer required master copies of each printed page to be first burned onto aluminum plates. These plates were then attached to the roller on the printer and ink was added with a caulking gun to an open tray at the front of the printer. Occasionally, a piece of paper would misfeed into the printer and bits of it would attach to following pages, rendering them unfit. This would cause Jeanie to speak in other languages, as the clean-up process was not fun! She learned early on to stay very close when the printer was running.

Typically, Jeanie would print a quantity of 500 for each of Scotchman's 7-8 page price books and have them collated, punched, stapled, and in crisscross stacks of ten on the shelf, ready to send out to dealers and reps who called in an order.

Keeping Her Job In Alignment

Eventually, she added U.S. Mail, bulk mail, and laminating to her duties. She was VERY glad to add bulk mail as the person before her filling these orders would hoard them and do them all up in one or two afternoons; thus, wiping out the shelves in one fell swoop. This also caused her to speak in a foreign language, but always with a smile on her face, as the printer went into turbo mode to re-stock the shelves. Jeanie learned it was easier to fill these orders as they came in; eliminating the need for colorful language.

As far as operator manuals go, she would find out from John Heltzel how many of each machine model were typically sold in a year and would print up that amount. When the supply got low, any changes that needed to be made were done and a new print date was added to indicate that it was the current production model.

Not very long into her employment, she worked on a safety update for 7-8 different machine manuals. At the request of Scotchman’s lawyer, John Heltzel was instructed to write a safety update memo and include it in each of these manuals, then have a new manual sent to anyone who had previously purchased one of these machine models. Scotchman also needed to have new safety stickers included to replace any that may have worn off or faded. The biggest print run was for our model 4014C ironworker, which was our best seller at the time with over 4,000 of them sold.

In 1-1/2 years, Jeanie printed, collated, punched, bound and mailed out close to, if not over, 10,000 manuals! Each manual had to have a safety update letter and packet of new warning labels included, along with certified/return receipt cards filled out. This was back before there was any such thing as an electric collator. She could get 100 manuals hand collated per day. The warning labels needed to be sorted and stuffed in envelopes; which some school kids often came in to help with that.

This particular mailing was vital to any pending lawsuits Scotchman may have been involved in. John was always a very calm and professional witness on the stand and in his writing of safety updates and manuals.... and that was a good thing, because Jeanie would have just bluntly said, “Listen, Numb Nuts, the manual clearly states not to remove these guards. But, sorry you can’t count on your fingers anymore.” 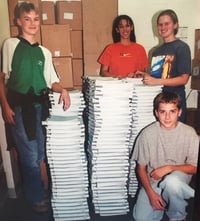 If/when a price change occurred, it involved printing 10-15 thousand copies of each price book because 10 to 20 packets were mailed out to each of Scotchman's reps plus over a thousand different dealers. Jeanie typically had 2-3 school aged kids helping after school to collate, punch and staple these price list packets. For most of her years here, between one and two million pieces of paper were run through the printer.

Midway through her 23-year career, Jeanie took over the Publishing as well. Whatever changes were needed were sent from John Heltzel to Engineering (or vice versa), then sent to the print room for her to tweak before printing. Scotchman joined the 21st century not that long ago and began offering pricing and manuals electronically, so printing largely went by the wayside. Fortunately, Jeanie hadn’t lost any of her mad cleaning skills so started daily office cleaning and anything else she could find to clean or organize, to try to round out her 40 hours.

Freelancing As A Side Gig

A highlight for Jeanie, came in March of 2013 when she discovered she had won the $1,000 1st place prize in a Readers Digest writing contest! The contest’s title was Best Worse Boss Contest and her winning submission read:

During my brother-in-law’s first performance review, his boss said, “I’m not quite sure what it is you do here, but whatever it is, could you do it faster?”  Yup, she made $33.33 a word. That brother-in-law was Jason Schofield and his supervisor at the time was Jerry Kroetch. True story that Jerry does, indeed, have a sense of humor!

Jeanie transitioned to part-time status on April 1, 2019, then took the entire summer off. She originally planned to return to work this fall, but discovered she liked her free time more so officially retired. No more alarm clocks, no more time clocks. Her future plans are to NOT COMMIT TO ANYTHING except happy hour and an occasional meal. Life is good for her and she hopes to run into her former co-workers now and then.

We wish Jeanie well in her retirement, but her friendly presence and witty personality will definitely be missed around this office.

Thank you Jeanie for your hard work and dedication to Scotchman over the years.

Topics: employee spotlight, About Us